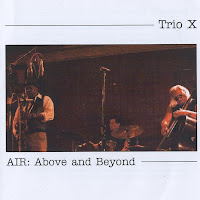 Trio X is another one of my favorite bands, playing totally free, subdued, spiritual and emotional jazz, with technical skills which are among the best to be heard. This album was recorded live in Montreal, Canada in June 2006, and my initial reaction was one of "haven't we heard this before?", because the music is so much in the same line as the previous long live recordings. But then one you're sucked into this band's universe of deep respect, sensitive interplay and subtle nuance, you cannot but admire what they're doing. Even the sound quality, which I did not really like at first, no longer mattered in the end, and sound engineer David Rush bends over backwards in the liner notes to explain how difficult it is to maintain CIMP's recording principles in a live setting, so lots of appreciation for his work. Joe McPhee (sax), Dominic Duval (bass) and Jay Rosen (drums) can each master many styles in free jazz from violent free blowing contests to avant-garde and experimental music, but with Trio X, free melodic emotionalism seems to be the key qualifier. The last track "A Valentine In The Fog Of War" is a variation on "Funny Valentines Of War", which already appeared on Roulette At Location One, and is itself a free funky version of "My Funny Valentine". There is only one track which is a little wild, "21281-2 Indiana", which starts with a drum solo introduction by Rosen, with a fierce McPhee and dynamic Duval joining half-way. All the other tracks, and especially the ones where Duval takes the lead, are calm, very calm even, but beautiful. Yes, it is more of the same, but at this level of excellence, who cares?

The name of the engineer on all CIMP recordings is Marc Rusch. Thank, though, for your review of one of the most exciting ensembles of our time.