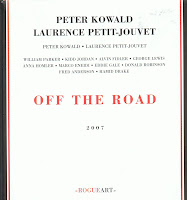 Hurray for the courage of the French label RogueArt for releasing this superb double DVD + CD in one package, documenting a visit by Peter Kowald to the United States in 2000. And not only their courage is laudable, also the unbelievable quality of the two DVD's. The first one is basically "On The Road", giving a kind of chronological overview of Kowald's trip, visits, car problems, meetings, street dialogues, snippets of performances with artists across the US, including Kidd Jordan, Marco Eneidi, Alvin Fielder (not "Fidler" as the cover announces), George Lewis, Assif Tsahar, Rashied Ali. There is music to be heard, for sure, but the overall impression of a musician on the road is the main theme, and Laurence Petit-Jouvet's documentary is so rich in content and so well filmed, that it could stand on its own, probably even of interest to people not interested in Kowald himself. The second DVD gives basically four performances, one live at the Empty Bottle with Floros Floridis on reeds and Günther Baby Sommer on drums, the second with Ken Vandermark in a studio, the third with Fred Anderson and Hamid Drake, and the fourth, the grand finale, approx 10 minutes of Kowald solo in the studio. Some of these takes can be viewed on YouTube, but they are not available for download. Apart from the sometimes great performances, the short interviews in between with the artists are often interesting and even enlightening, talking about cultural interaction, freedom (in music and society), universal language, emotional rapport, transcending one's own self-created limitations, etc.

Some of the most interesting performances (but unfortunately not the one with Floridis and Sommer) are to be found on the CD : a bass duet with William Parker, the trio with Jordan and Fielder, a duet with George Lewis on trombone, a duet with vocalist Anna Homler, a quartet with Marco Eneidi on reeds, Eddie Gale on trumpet and Donald Robinson on drums, and then the trio with Fred Anderson and Hamid Drake, and another magnificent solo bass piece, this one performed live.

The frustrating thing about this package is that you know that much of it remained unrecorded (or recorded yet unreleased). And on the other hand not everything is successful either, or at least not always to my taste. Yet for those interested, some of the performances were released by other labels, such as "Illuminations" with Gino Robair and Miya Masaoka or "Deals, Ideas and Ideals" with Tsahar and Rashied Ali and "Ghetto Calypso" with Marco Eneidi, Damon Smith and Spirit.

A great document on a great bass player.
Stef on Saturday, March 01, 2008
Share