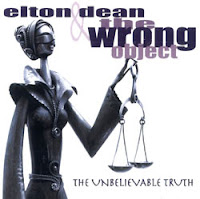 The Soft Machine was a British 60s prog rock band, releasing two albums with Kevin Ayers, Daevid Allen, Mike Ratledge and Robert Wyatt, mainly bringing surrealistic psychedelic poppy tunes. After Ayers and Allen left the band, and in order to reward contractual obligations, Ratledge and Wyatt asked Elton Dean and some others to join for their Third album, released in 1970, an album which for me has been an all-time favorite, creating an unbelievable mixture between rock, jazz and psychedelia, and still now, after all these years, the record is worth listening to because of its unrestrained creativity and powerful drive. It set the stage for many similar endeavors by The Soft Machine themselves, but also for many fusion bands, more often than not without much success. The Soft Machine has continued to perform in a large number of various line-ups and musical styles, and I must admit, they lost me in the process. Now, in 2005, just a few months before he passed away, Elton Dean recorded this nice CD with the Belgian jazz-rock band "The Wrong Object", live in Paris. Dean and the band rehearsed each other's material before the performance, but never actually played together because the band's van broke down, and they arrived just in time for the sound check. The band consists of Elton Dean on saxello and alto sax, Laurent Delchambre on drums and percussion, Fred Delplancq on tenor sax, Michel Delville on guitar and voice, Jean-Paul Estiévenart on trumpet and Damien Polard on bass. It's hard to believe they never rehearsed, because their interplay is excellent. The music is propulsive, rhythmic, hypnotic, magical at times, sometimes reminiscent of the early Soft Machine, or of the Electric Miles, with long yet focused soloing, and with Dean literally shining, especially on the first two tracks. Not all the pieces are to my taste though, especially when they throw in little gimmicks like the vocals on the introduction of the fifth track, not all the compositions are on the same high level, but the most important thing is that they remain the vehicles for long and enjoyable improvisations, with an unmistakeable seventies rock drive. Great fun!

Watch "Seven For Lee", from the same live performance in Paris, October 18, 2005