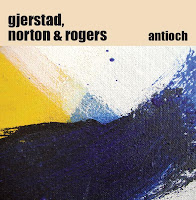 Here's again a classic free jazz CD with three masters of the genre, Norwegian Frode Gjerstad on sax, American Kevin Norton on vibes and drums, and Englishman Paul Rogers on bass. This is probably Gjerstad's umpteenth sax trio CD and after all these years and all these performances and all these releases you may start to wonder if getting another one of his CDs is really worth it. And the simple answer is "yes". Not only Gjerstad, but the three men are really inspired. Rogers' bass-playing, especially when playing arco, as he does quite often on this 4-track release gives a haunting, deeply emotional background over which Gjerstad gives one of his best and most articulate, precise and heartrending performance of recent years. And Norton is excellent, adding great touches and shades of color with his vibes without overpowering the two other instruments. That being said, in terms of sound quality, this is also one of the best releases of Ayler Records in recent years. The music is entirely improvised, but the three artists are intelligent and creative enough to keep the attention going, moving between very intense, hectic parts to slow, meditative or plaintive moments, and the most important thing is that the three musicians almost permanently create the overall musical effect together, it is not a question of alternating solos, wich in a strict sense they hardly ever do here, just weaving their sounds through each other to paint a beautiful improvised canvas. Melody and rhythm in the traditional sense are not high on this trio's agenda, so I'm not too sure whether this music is accessible, but it sure is very attractive, as you get sucked in by the sublime interaction and magnificent musical expressivity. The only downside is that it stops too early (and cut off in the worst possible way, as a fast fade-out).