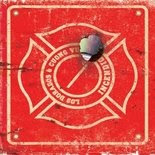 This is the third release of the Mexican jazz band Los Dorados. I will not tell you what score I gave to their previous CDs, but it wasn't high. This one is remarkably better, if only because of the presence of trumpeter Cuong Vu. The band consists of Daniel Zlotnik on sax, Rodrigo Barbosa on drums, Carlos Maldonado on bass and Demian Galvez on guitar. Their musical influences are relatively recent, with traces of the electric Miles Davis over regular rock to the more modern music of Cuong Vu himself, but also Jim Black, and despite the rhythmic and melodic foundation, they're not afraid to cross boundaries, nor to respect the tradition either. The good thing about this young band, is that fun and self-relativation are important elements in their approach, combined with instrumental skills and lots of discipline and drive, yet they are clearly still trying to find their own voice. Some tracks are really excellent, such as "Acapulco Golden", which has some great sax and trumpet interaction, or the title track "Incendio", which starts with a nice electric bass vamp, some scratching, halting drumming and Cuong Vu's trumpet moving into bluesy Miles territory with some Lester Bowie's trumpet whispers in between. The closing track, called "Marmotas In The Toilette" is also worthwhile, more uptempo, very structurally disciplined yet unleashing all their improvisational talent. A nice album.

They have a video on Youtube, but it's pretty boring stuff, stopping all the time.
Stef on Tuesday, April 22, 2008
Share