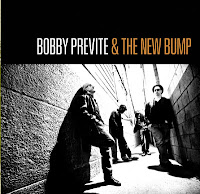 Back to more jazzy territory, with the new CD by master drummer Bobby Previte. His "Bump" band has released very rhythmic, funky even, modern jazz with their first two releases (with Marty Ehrlich, Wayne Horvitz, Steve Swallow, Ray Anderson to name but a few). This one is a little bit more moody, less funky, but broader in musical scope, fusing jazz and rock, and even Latin elements in a kind of soundtrack-like atmosphere, which is determined to a very large extent by Bill Ware's vibraphone, with great musicians like Ellery Eskelin on sax and Steven Bernstein on trumpet adding their bluesy melancholy late evening sounds over it, with a solid rhythm section consisting of Brad Jones on bass, Jim Pugliese on percussion and Bobby Previte himself of course on drums. The music itself is not boundary-shifting, but it is still nice to listen to, unobtrusive, full of soul and feeling, full of tension and sweetness at the same time. There is also no comparison with his adventurous excursions with Charlie Hunter, or with his recent "The Coalition Of The Willing". The tempo went down compared to the previous releases of Bump, but the quality is still high, both in terms of the compositions and of the overall unity of the album. Some of the tracks are open invitations for slow and tender dancing, and that is not something that I can often write on this blog. Bill Ware is brilliant on this CD, in his restraint and magnificent coloring of the overall sound.

Listen and download from Palmetto. (you can download for US$ 9, all-in, which is a good deal for Europeans with the current currency exchange rate)
Stef on Monday, May 05, 2008
Share