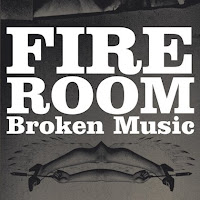 More stuff from Norway : Fire Room, with Lasse Marhaug on electronics, Paal Nilssen-Love on drums and Chicagoan Ken Vandermark on sax. When I first listened to it, I thought the record would have been better without Marhaug's electronics, which are often irritating, and just adding noise. On the track "When Water Burns Air", Vandermark and Nilssen-Love unleash all the physical power they can muster, playing up a storm, being called to a halt by some tiny electronics, and the drums get a long and excellent polyrhythmic solo, which is brought to a final silence by the softly sqeaking intervening electronics, probably the best example of how fire can become broken music, but also demonstrating how the electronics can force direction into the music, leading to effects in the acoustic instruments which would otherwise probably not have happened. On some of the other tracks, the electronics bring just noise, in the form of loud static, or a thundering noise, or crackling explosions, adding nothing musically except static, a thundering noise or crackling explosions. In between, over, and unfortunately sometimes under the electronics, there is the wonderful playing of both Vandermark and Nilssen-Love. OK, you get my feeling : I don't like electronics. I would like to remix the recording without them, and you could have something decent. After listening several times to the album, my initial feelings have not changed. But kudos for trying.

Your piece of writing would make more sense if you had inverted its two main elements (that is, if you had written about your dislike of electronics in free jazz and used the Fire Room album as merely a piece of evidence to support your
argument).

Fire Room is a trio. One third of the trio is a guy who plays electronics. Thus, electronics are an integral part of the sound of Fire Room.

You end the review by stating that you'd like to remix this album to remove the electronics, so that "you" (i.e., the reader) can have something "decent."

I notice that you described a Spring Heel Jack album as "really great." And I see a 4 star review for David Torn's Prezens album. I'm guessing there's other albums you've given positive reviews to that feature an electronic element. Maybe it isn't electronic music you have a problem with? I don't know.

I would have enjoyed your review of Broken Music more if you hadn't approached the album with a bias against electronic music. But kudos for trying... ;)

(The above aside, I do - with the rare exception - enjoy reading your reviews, and have become aware of a number of great albums through them. I'm sure writing reviews as frequently as you do is time consuming, and I appreciate your
dedication to this blog.)

You have a point of course. I am not against electronics per se, and I do appreciate that adventurous minds explore new and unknown territories.

I can only give my appreciation of this album, and that is that the electronics do not always work for me, with the exception of some rare moments.

I wish it was otherwise.