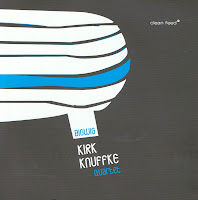 Although the Clean Feed label changed the design of its CDs (gone are the complexly folded brown cardboard sleeves), they have not changed their ability to spot new talent and to give them a chance. And that's the case with the Kirk Knuffke Quartet, the first CD of the trumpeter as a leader, although he has already recorded several albums with amongst others Butch Morris and Kenny Wollesen. Knuffke sought out band-mates Reuben Radding on bass and Jeff Davis on drums, initially for a trio recording, but after he met trombonist Brian Drye at a concert he invited him to join. After many live gigs they now have their own album, of what can be called "free bop", with influences of Ornette Coleman but also of more traditional swing. The music is rhythmic, with nice themes, great improvisations and wonderful interplay, and - surprisingly - relatively compact. The 12 tracks are on average 5 minutes long, and that's short compared to most free jazz tracks. This is of course straight-ahead music, with no other goal than to bring a nice tune, play with it, explore it, juggle a little with it, bounce it around among the four musicians and bring it to a close, before they start doing the same with the next tune. This sounds disrepectful, but it is not : the themes themselves are often complex, as are the rhythms, the exploration, the juggling and the playing are excellent, a joy to hear and probably fun to play too, or that's at least how it comes over. Great debut.