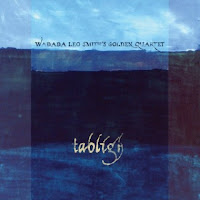 Trumpeter Wadada Leo Smith has always been one of my favorite musicians, and that is confirmed again by the new release of his Golden Quartet, which consists of an entirely new line-up. Anthony Davis, Malachi Favors and Jack DeJohnette having been replaced by Vijay Iyer on piano and Fender Rhodes, John Lindberg on bass and Ronald Shannon Jackson on drums. The new musicians are of course not comparable to the former band, and that is easy to notice. It's the same high quality, but the approach is different. And sure : also Vijay Iyer and John Lindberg are also among my favorite musicians of the moment (see my list of CD Reviews for further information).

On "Rosa Parks", the first track, the four musicians venture back into electric Miles territory, with a soaring staccato trumpet, wah-wah pedal on the bass, thundering drums and with the electric piano filling in the spaces with interspersed chords and fast runs on the keys. The piece starts and ends with slow and meditative solo trumpet with a highly rhythmic very intense middle part. The second track is called "DeJohnette", aptly starting with fierce drumming by Ronald Shannon Jackson, joined by Vijay Iyer who surely is one of the most lyrical and rhythmically adroit pianists of the moment, he moves the track into free jazz regions, very abstract and dissonant, joined by John Lindberg on arco, then there's a moment's pause and Wadada's rhyhtmic trumpet invites the other musicians for an uptempo improvisation, which falls quiet for a long lyrical and abstract center part, which slowly gathers speed and momentum again : electrifying and beautiful. The third track "Caravan Of Winter", is slow and mysterious. The last and longest track is called "Tabligh", which is Arabic and means as much as "the duty to convert". The spiritual connotation of the piece is evident, with Wadada Leo Smith playing slow, precise and piercing trumpet tones over a sparse acoustic piano background to start with, then the piece explores a variety of moods, alters intensity and even styles.

The four musicians complement each other quite well. And if the first track was reminiscent of Miles, the music evolves into the more spiritual areas of the late phase Coltrane, creating vast expanses of sound, but with a relatively open texture, unhindered by fixed concepts, free, yet clearly structured. The soft lyrical approach of Lindberg and Iyer is in stark contrast to Ronald Shannon Jackson's hammering and pounding, which is absolutely essential here to bring the rawness needed in this journey, to create depth and variety. And Wadada Leo Smith spans everything. He is lyrical, intense, soaring, powerful, meditative, hard, soft, deep ... and offering lots of space to the other players. The amazing feat is that the quartet - and this really is a quartet album, rather than an accompanied soloist - integrates much of the lightness and almost zen-like fragility of Wadada's solo or duo releases. An amazing and paradoxical album, full of musical inventiveness, human feelings and spiritual moments.

For sure one of the highlights of this year.

There is also a new DVD with this Golden Quartet released, called Eclipse.

Watch a clip from the DVD (and notice the excellence of the editing!).

Unfortunately, I missed his concert a couple of weeks ago in Antwerp.

The sample's great. It's Miles alright!