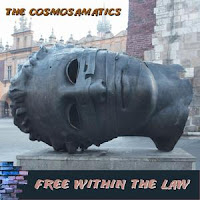 Sonny Simmons is a musician with ups and downs. Sometimes great, sometimes uneventful. And so are the Cosmosamatics. Although the musicianship is good on most albums, I often wonder what their story is about. They have no clear musical positioning. It's nice, it's sometimes adventurous, but then again, I often think I've heard it so many times before. So far, I find "Zetrons" to be among their best albums. This CD shows them from both angles : the first part, recorded in the studio is better than the second, recorded live at Alchemia in Krakow, Poland, in November 2006. On the first part, Simmons's plays the English horn, an unusual instrument with an unusual sound, but the tunes and the improvisations are a little more inspired than on the live performance. The band consists of Sonny Simmons on alto sax and English horn, Michael Marcus on tenor sax and Bb clarinet, Peter Herbert on bass and Art Lewis on drums. The band moves between free bop and free improv, with African influences on "Afro Funk", which leads to captivating passages. After all these years, both sax-players play together with such ease and anticipation of each other's moves, that it is fun to hear. But then something happens to the live set. It becomes kind of uneventful. It sounds nice, but I fear there is no story to tell. A little disappointing after a great start.