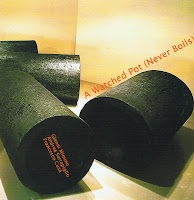 Gianni Mimmo is an Italian soprano saxophonist who, although using traditional styles, really has a great approach to avant-garde jazz, and this album is a wonderful example of what modern music can sound like without alienating listeners. He is joined by Andrea Serrapiglio on cello and Francesco Cusa on percussion. The three manage to create little gems of free music, playing their instruments with an almost classical tonality and sound, while the musical approach is exquisitely modern. It has the paradoxical quality of being cerebral and warm at the same time, with abstract improvised compositions with high intervallic jumps, but played sensitively and full of empathy. The other great asset of this record is the variation brought by the use of the instruments, and then especially by the percussion, which hardly ever provides the basic rhythm for the piece, but usually prefers implicit support, accents and shadings to the improvisation taking place.

The third great thing is the variation in the styles, demonstrating that even avant-garde can be fun and is not necessarily high-brow, such as in the joyful "Pot Head Pixies" (yes, I'm a Gong fan too!), or the somewhat bizarre "Cartoon Shouter".

I'm not quite sure what the title of the album refers to, but the best I can find is the Japanese definition of great art as "controlled passion", another contradiction which works well in this case, and which is also illustrated by the compactness of the tracks, which apart from offering lots of variation, also demonstrate that the musicians concentrate in a very disciplined manner to extract the essence of the musical idea, without loosing themselves in long and meaningless excursions. A strong achievement.

dear Stef,
thanks for your nice review on a watched pot (never boils).
you've really understood the way this work has be done. we are three different musicians coming from different areas but when musicians( also men do the same) are in a close row they have to find a solution, they can find there the clear possibility to see themselves in a different and naked way.
i'n really in love with this cd because is sincere and fresh, is body and brain, is embracing and conceptual. if you wait looking at the pot, the water never boils.
if you stay IN the time, if you accept that time stay IN you something new and true happens.
really thanks again, man.
musical blessings from
gianni mimmo
www.amiranirecords.com

p.s.: also i want to thank you for the review of the holy experience of "your very eyes"in duo with Xabier Iriondo.
all reviews are then on my label web site.
musically
gianni