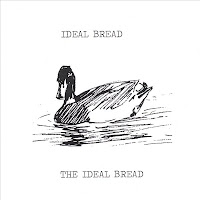 Because of the recent Kirk Knuffke CD on Clean Feed, I checked for other recordings with the trumpet-player and I came across "Ideal Bread", a band created by Josh Sinton, who plays baritone sax, and further consisting of Reuben Radding on bass and Tomas Fujiwara on drums. Originally the band wanted to bring a tribute to Steve Lacy's trio recording "NY Capers & Quirks", recorded in 1979 and partly re-issued on Hat Hut records. What Ideal Bread does with Lacy's CD is more than just bringing an updated version of his music. I am not that familiar with the original material, but what they do here could stand on its own. The themes are of course the same as on the original Lacy release, but what they do with the music is really their own, moving it far into free territory, while often maintaing the structural anchor points of the pieces. Sinton's baritone sounds excellent, full of passion and depth, and his idea to add Knuffke's trumpet is a great one, not only because it relieves some of the burden to emulate on his own the power of Lacy's playing, which is not the point of this tribute, it's about the music, but it also adds variation and contrast to the overall sound. And that sound is also very coherent in the various tracks, because of its creative approach to the material, and its wonderful fusion of bop with free jazz and real avant-garde, presented in all its logical continuity, switching styles without changing mood or without losing focus. I hope we will hear more of this band in the future. Recommended.