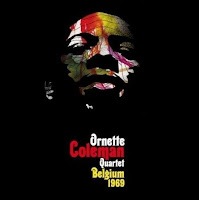 This performance by the Ornette Coleman Quartet was recorded live at the Belgian Jazz Bilzen Festival in 1969. Apart from Coleman himself on alto, trumpet and violin, the line-up further consists of Dewey Redman on sax and arabic oboe, Charlie Haden on bass and Ed Blackwell on drums. The performance brings three tracks from one of Coleman's best CDs "Crisis", which was released earlier that year : "Comme Il Faut", and the sublime "Song For Ché" and the equally sublime "Broken Shadows". The track "Space Jungle II" is a kind of sequel to "Space Jungle" that also figures on "Crisis", although there is no clear musical relation between the two songs. I am a great fan of Ornette Coleman and it's great to hear this performance, and it's a pity that Don Cherry is absent here, because to me he's always been an essential part of the band, adding a playful element and a great counterpart to Ornette's blaring sax (as said before, the man's a genius, but I don't like the sound of his alto!). Haden, Redman and Blackwell are excellent, with the latter's polyrhythmics offering a great change to performance of the 13-year old Denardo Coleman's on "Crisis". Redman's solo on "Comme Il Faut" is superb and gives an idea of what "Old & New Dreams" would bring in the 70s and 80s. The most stunning performance on this album is the the 16-minute long "Space Jungle II", which starts with Redman's arabic oboe and Haden's arco bass, both as free as it gets and wailing, generating spontaneous applause from the audience. Coleman joins on trumpet, and even if the sound balance of the recording is not excellent, the overall experience still stands, especially when half-way the track Haden's arco bass goes totally futuristic while Blackwell conjures up African rhythms, supported by Redman's gnawa-like playing, as a lead-in to a five minutes screeching violin solo by Coleman. Coleman's technique is not exceptional, whether on sax, trumpet or violin, but that is more than sufficiently compensated by the man's sense of music, he can go "out there" where few had gone before, retaining an inner logic and remaining emotional. The other tracks are great too, but have known better recordings. "Broken Shadows" brings the beautiful unison melody in a little over three minutes with no room for expansion, but thankfully "Tomorrow" brings a lot of improvisation. The overall sound quality is not excellent, but I assume it would be OK for fans. I'm an Ornette fan, so I rejoice each time something by him is released. If you're not an Ornette Coleman fan, or if you don't know his music, there are other albums that require prior listening. Great cover art too.