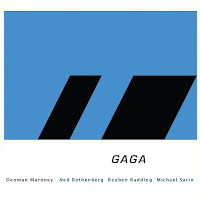 Pianist Denman Maroney is something else. Already on "Distitch", with Mat Maneri, his cerebral approach to creating new musical universes became apparent, while maintaining a high sense of emotional lyricism. Music can sound clever, yet awful. The real challenge is to create something new that still sounds great, as on this album. Maroney is joined by three stellar musicians : Ned Rothenberg on reeds, Reuben Radding on bass and Michael Sarin on drums. Because of Maroney's calculated, even mathematical approach to music, every piece sounds extremely precise and finished, even the long title track, while still sounding very open and refreshing. "Gaga", the track, changes the whole time, while remaining essentially the same, giving the impression of watching the flow of the water just next to a river bank, very repetitive, very minimal, yet every few notes adds something different, either rhythmically or musically. The music is measured, thorougly composed with limited improvisations and certainly not very expressive. In that sense it's very un-jazzy in its approach, despite the line-up, and yet, it has a jazz sensitivity in mood and tunes. While searching for a clear aesthetic form, it does not sound distant at all. "Social Security" is probably the most jazzy tune, while "Frogs" has some Latin influences and "Blip" has a march-like cadence. But genre has become irrelevant for Denman Maroney's music. He loves rhythmic and compositional complexities while keeping the surface of the music appealingly simple and accessible. And the four musicians are absolutely a pleasure to hear. This is ear-candy from beginning to end.