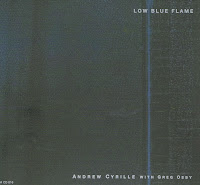 A little later than planned, I bought this CD, after I tried in vain to order it through the Finish TUM label on which it appeared and strangely enough no longer figures. Anyway, when two of today's greatest jazz musicians play together, fireworks are the result. The veteran free jazz drummer demonstrates what experience and rhythmic creativity mean for music, while young alto and soprano saxophonist Greg Osby's warm and broad pallette really flourishes in this free and dynamic environment. Apart from Monk's "Work" all the tracks are original material, mostly improvised or composed for the occasion. So, in short, anyone interested in drums and sax should have a close listen at how these two artists bring musical interaction to an almost sublime level. The title track alone is worth the album : a highly intense bluesy piece with a steady opening riff hammered into your head sufficiently enough to keep it in the back of your mind for the rest of the track, and then listen how these two wonderful musicians play around it, moving away from it, doing completely different things, but never missing a beat from the original riff : six minutes of pure musical joy. As Cyrille describes it : "The blue flame of the fire is its hottest part. It does not waiver in its uniqueness. In a similar fashion, let this music be a testament to that uncommon quality". Quite an accurate description. The only downside on the album is a poem recited by Cyrille over a sax solo (sorry guys, I still hate it!). This is further and free-er than Osby has ever played on record, and even if he starts playing melodic and with patterns, Cyrille's dynamic approach pushes him on to go further and further into more adventurous areas, and the saxophonist does it and he does it well, but without losing the warmth and the roundness of tone in his lyrical playing. Andrew Cyrille's drumming is absolutely stunning at moments, not only because of his technique, but more for his creative wealth, his organization of his rhythms, his permanent changes in approach on the same rhythm. Pieces like "Cyrille In Motion", allow him to showcase his fabulous technique and musical ideas, as is "The Music In Us", again a bluesy track with initial slow blowing by Osby, but rapidly gaining speed and intensity, underpinned by a 13/4 rhythm, which results in a strange, energetic combination of sadness and joy. The album ends with Cyrille playing light percussion in a tribute to Roscoe Mitchell, and he does it with lots of silence, creating a spiritual, shamanistic feel. Another wonderful record which has almost gone unnoticed. Don't miss it.