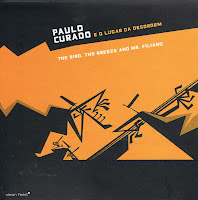 This is the fourth Clean Feed release on which Paulo Curado contributes, on alto or flute, and here as the leader of a trio format, with Bruno Pedroso on drums and Mr. Filiano on bass, for what seems to be eleven improvisations. I say "seems to be", because at times it's hard to believe that it is improvised. Each piece has its own angle, its own logical flow, which remains present throughout the piece even if there is no clear theme or melody, although on some tracks, such as "Escondidas", a kind of theme emerges from the improvisation. Ken Filiano is without a doubt one of the best bass players around, not only because of his technical skills (his arco playing is unbelievably precise), but because of the feeling he puts into it, often bluesy, with lots of soul, and because of his creative musical approach, mixing new forms with old feelings, or old forms with new emotional experiences, and any other combination of this. Listen to his solo piece "As If", where he has a captivating dialogue between arco and pizzi. And Paulo Curado is in the same league, which makes this a great fit. He's a cautious, gentle player, with a warm tone, very creative in his phrasing, which is sometimes very jazzy, and at other times more easily catalogued as avant-garde. Bruno Pedroso, acting as "The Breeze" in the title, plays very open, following the music well, creating the right percussive backdrop to create depth to the music, without falling into rhythmic patterns in the "open" pieces and very dynamic on the more boppish tunes. His duet with Curado on "Pequenos Duendes" is a real delight of interplay. There is lots of variation on this CD, strong musicianship, and great music, with the long "Por Fim Assim" as my favorite.

Any way I can get in touch with you, Stef?

My email address can be found in my profile on the right somewhere of my blog, but to make matters simple: here it is: "freejazzblog@live.be".