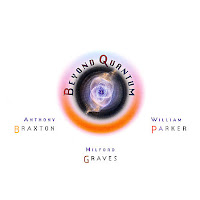 I think Braxton is at his best when he improvises, as he does on this album. On most of his other albums, his compositions are often abstract, distant and cerebral, unfortunately. But once in a while, as on the 100th release of Clean Feed, and here on "Beyond Quantum", wonderfully accompanied by William Parker on bass and Milford Graves on drums, Braxton demonstrates his absolute superiority on the sax. The album consists of five tracks, each representing a "meeting" between the three artists, ... and meet they do! This isn't a Braxton record, it's a real trio album in which the three of them create the music together. Braxton has got soul on this record, pushed forward, challenged by Parker and Graves who are staggeringly good. Graves' percussion is as multifaceted as it is unrelenting, as if he has a few arms more than ordinary people. Parker is again nothing less than superb, anchoring the rhythms, creating repetitive vamps at times, or clusters of notes at others, while Braxton keeps changing his horn all the time, soaring, stuttering, wailing, screeching, but most of the time very lyrical and soulful. This is free jazz at its best : with an incredible drive, purely improvised, with lots of variation and expressive delivery. The first track is the perfect opener : a sensitive reconnoitering of the possibilities, still within the range of accessibility, with great polyrhythmics and a very meditative Braxton, weaving beautiful sounds over the often odd rhythmic parts. "Second Meeting" starts with high-pitched wailing sax playing, moving to tribal shouting and chanting and rhythms, creating a kind of spiritual and ritual and sometimes festive mood, while "Third Meeting" is more adventurous, especially because Braxton explores the full tonal range of his instrument. "Fourth Meeting" starts with high whistling, joined by Parker on arco, followed by some otherworldly and unique soprano playing, while Graves keeps moving about, hitting all his cymbals and toms simultaneously without hesitation or sign of fatigue. This is raw but deep. On "Fifth Meeting" Parker moves to reeds too, playing his Indian shenai (I think), adding a world music flavor to it. This is great. This is music without boundaries. Anything is possible. Because of their skills. Because of their vision. Because of their creativity. This is music that demonstrates that any written part would have acted like a cage. This is wild as it should be. True. Fierce. Naturally restrained. Authentic. This is free in its truest sense. You, as a listener, can share in the joy of this freedom when listening to it. Enjoy!

I'm waiting for your review of the newest addition to the Book of Angel series - Zaebos by Medeski, Martin & Wood.
You can find three tracks on their MySpace site :
http://profile.myspace.com/index.cfm?fuseaction=user.viewprofile&friendid=35343227

I think they might suit your taste as they seem rather free.

I'm waiting to hear the full album - I can't wait to hear it actually.

One more thing- would you recommend this record to a "free jazz beginner" ? I'd really like to get into this music, but haven't been successful yet. Well, there's Drew Gress, Myra Melford and Matana Roberts, but I'm still very much "new" to the genre.

Hi anonymous, that's the million dollar question. I think it depends where you come from? What is your preferred genre? Mainstream jazz, classical, rock, pop, fusion?

Some moments on this record may sound harsh to unaccustomed ears, but other parts are certainly accessible enough. I usually recommend William Parker's Raining On The Moon as an entrance into free jazz. Very boppish and free.

I actually got Both Raining on the Moon records :) I like them! I also have Hamid Drake/Paolo Angeli Uotha.
I must say that I really enjoy Parker's and Drake's playing.

I also quite enjoyed Matana

By the way, what about Double Sunrise Over Neptune? There's a excerpt on the AUM Fidelity site and I like it, but since the tracks on the album are so long it's tough to tell how the record will sound.

And I come from a jazz background. But I also enjoy various other genres like rock and blues.

Check my review of Double Sunrise Over Neptune : it is brilliant (I mean the album, not my review)