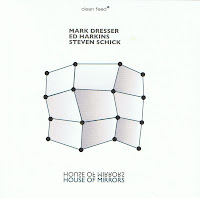 It is great that musicians keep coming up with creative approaches to music. In "House Of Mirrors", Mark Dresser (bass), Ed Harkins (trumpets) and Steven Schick (percussion), go in search of planned rhythmic complexities and melodic improvisation, in itself an ambitious endeavour, yet in the hands of these three top musicians, it evolves into something combining the improvisational freedom and soulful intimacy of jazz, with the cerebral calculation of new music. Apart from the odd meters, tempo changes and rhythmic complexities, lots of attention is paid to the sounds of the instruments, leading to quite unexpected but refreshing ideas, such as the water percussion on "Osculla", to the use of various types of trumpet by Harkins and the "surrealist" pick-ups used by Dresser for his bass (for more insights into this 20 year science project of his, click here). The intense focus on the rhythm gives the music an angular immediacy, with no room for expansiveness or lyrical explorations, requiring extreme concentration from the three musicians to come up with new ideas all the time. Indeed, there does not appear to be one moment on the album where automatisms and practised phrases find a place. On the composed pieces, the music does not flow, it bounces, and the improvised tracks luckily bring the reverse : more flow and less rhythm, making the overall result sufficiently varied and balanced. But whatever the point of departure, every note sounds new and specifically construed, which, together with the strong rhythmic base leads to some hypnotic moments, especially the two longest pieces, "Xonia" and "Osculla". The various instruments act on exactly the same level to create the overall sound, and the traditional roles between melodic and rhythmic instruments are more often than not inversed, with the trumpet setting the rhythm and the percussion adding variation and color. Some tracks, such as "Rebus", are totally free improv, and it is even hard to distinguish which sound is produced by which instrument. Dresser had been tinkering with the idea of exploring this approach to music since 1999, when he got acquainted with Harkins' pedagogical book of rhythms. It took them almost nine years to bring the idea to fruition, and it's certainly one worth to further explore, but let's hope a little faster than nine years this time. The overall effect is clever, tight, refreshing, intimate and fragile music.