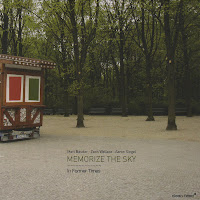 This is the second album release by Memorize The Sky, the trio consisting of Matt Bauder on reeds, Zach Wallace on bass and Aaron Siegel on percussion. I never heard their previous CD nor the 3" CDs they released before that, but their music is quite unique. Bauder's circular breathing takes center stage on most tracks, leading to gentle droning sounds, accompanied by extremely precise and accurate gentle touches by the bass and percussion, in the all the wealth of sounds they can muster. At times it sounds like the roles are reversed, and that the horn forms the backbone of the music, while the other instruments add the variation. Even if there is no circular breathing, Bauder still keeps the tune strongly anchored around a single tone center, as in the beautiful first track "Did I Tell You?". The other instruments pulse along in very repetitive patterns, shifting all the time in timbre and shading, uncovering hitherto unexpected musical qualities and textures. I am very often a little hesitant with avant-garde, because the form often takes precedence over the content, but that is certainly not the case with this band. They give the sax trio a totally different sound and dimension, while still sounding accessible and emotionally sensitive, sometimes it sounds almost electronic or industrial, but it could also be the oscillating sounds of nature brimming with insect life. Only one track, "Treat Me Like A Picture" did not really strike me (yet), but it adds variation and a slight difference in approach. There is a long moment in this piece on which it is hard to discern which instrument makes which sound, or rather, and it's hard to believe, in which all three musicians make a long, sustained, identical sound despite the difference in instrumentation. The last track is also an absolute beauty. An excellent record.