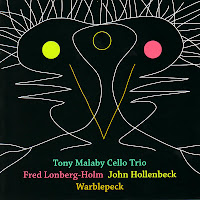 Technical skill on the instrument is often an impediment to creativity, but sometimes, as on this album, it can be unbelievably refreshing and inventive. Tony Malaby's sax playing is among the best of the moment, and Fred Lonberg-Holm on cello and John Hollenbeck on percussion are two musicians with lots of musical baggage, ranging from traditional to experimental music. On Warblepeck they bring something unique : melodic power, rhythmic complexities and musical surprises that would already be great on one track, yet they keep the high quality and creativity on each of the eleven tracks. One track "Waiting Inside" is a Bill Frissell composition, brought here as improvisations around the original theme and harmonic changes. The great thing is that despite their stellar technical skills, these musicians don't take themselves too seriously, they have fun playing this music. Listen for instance to "Fly On Wall/Remolino", which starts as a playful evocation of ... well yes, a fly on a wall, with the three musicians playing as quietly as possible, yet evolving into the second part of the track which moves the piece into full frenzy and powerplay with Lonberg-Holm opening the full distortion on his cello, Hollenbeck hitting his kit as hard as possible, while Malaby screams above it all. The title track "Warblepeck" is equally fun to listen to : an odd rhythm and theme, short and repetitive, with sudden changes of tempo and polyrhythmic percussion. Or listen to "Jackhat", with its bizarre beginning, birdlike sounds, evocations of jungle sounds. Other tracks have a more serious approach, such as "Anemone" which starts with arco cello and eery chime-like percussion. When Malaby joins on sax, the piece turns into a sweet and heart-rending beauty, playing double-toned and once in while even getting flute-like sounds out of his sax. "Sky Church" is more abstract in concept, with Lonberg-Holm using many effects to great effect.

The whole is a kind of "l'art pour l'art" thing, with the difference that despite the craftiness and the subtle musical explorations, the emotional component is very strong, because of Malaby's very sensitive sound, but also because of Lonberg-Holm's rich pallette and Hollenbeck's drive and sense of melody. This music is something else, and it demonstrates that avant-garde can be very accessible, rhythmic, emotional and great fun. Don't miss it.

Amazing skill was put on the line in the Bill Frissell composition. I know what it takes to compose and direct and trust me people, its only successful if you really love it, if you have a passion for it.