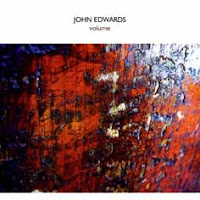 Just because I like solo bass albums, here is another one, this time by British bassist John Edwards, and despite his extensive discography in the free improv scene, this is his first solo release. The album aptly starts with "Matter", a piece in which Edwards demonstrates all the solid ingredients of his trade. Solid means that his notes sound like rocks and stones, not like anything fluid that you would usually associate with music, as if the individual sounds get a common context without linear relationship. "Pin Drop" continues in the same vein, but as the title suggests, in a much quieter envinronment, moving to intense scraping of the arco, followed by tiny rhythmic patterns, almost sounding like African percussion. Some tracks do have a linear structure though, as on the fully bowed "From The Depths", but all tracks always stick to a certain coherence of approach, even if the logic is not always clear, if there is any at all. The real strength is in revealing the mystery of single sounds, the intimacy of man and instrument, the qualitative purity of a single note put in a context, the suprise of the in-the-moment improv, in creating the mystery of a single sound. This is surely music for people with very open ears, and for bass-players.