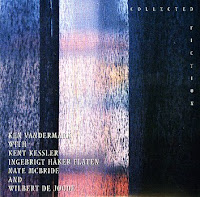 One more important record to the art of the reed & bass duets, now with Vandermark on reeds, and some of today's greatest modern jazz bassists: Ken Kessler, Ingebrigt Håker Flaten, Nate McBride and Wilbert De Joode. Not only because of the variety of reeds used, and the different styles of the bass players, but also the approach differs greatly on all these relatively short improvisations. Some are fierce and wild, some boppish, and some are very sensitive and restrained, creating a kind of tenderness which is unusual for the usually muscular Vandermark. The sequence is Kessler (six tracks), Håker Flaten (five tracks) for the first CD, which is called "Day", and then McBride (five tracks) and De Joode (six tracks) for the "Night" CD. Although the pieces are improvised, they were rehearsed around specific thematic sounds, and the best take made it to the disk. The recordings were made on February 4 and 5 of this year in Chicago, the city where Vandermark, Kessler and McBride reside. The twenty-two tracks show a broad variety of angles for the sax-bass duo, demonstrating not only the skills of the musicians, but also the breadth of the subgenres of modern jazz, the wealth of possibilities of improvisation, using influences from blues over swing to bop and free. From Mingus over Giuffre to the wildest avant-garde, it is always brought with conviction, depth and focus, with Vandermark often a defining element in the music, yet sufficiently adaptable to match the styles of the four bass-players. Rich and subtle.

Please listen our proposition of jazz @ polish alternative SRF radiostation (www.radio.frycz.com). Listen "Jazz alchemist" radio show every monday at 21 CET).
Listen us and tell us what you thing about our jazz proposition. Please listen us via winamp. open player, press crtl+L and paste our streaming link: http://91.121.31.165:8042
Taste in alternative - radio SRF from Cracow!

Vandermark and McBride together are amazing. I've got to pick this up. I just got Atomic School Days' "Distil," the Territory Band's "New Horse for the White House," and FME's "Cuts." Ken is awesome dude. I met him in Buffalo a few years back at a CINC gig. It's always sweet to hear his new work. Have you seen the "Musician" dvd yet?

Hi Stephen, thank you for your comment. No, I'm still waiting to get a copy of the DVD. I've just received Marc Ribot's The Lost String. More on that later ...
stef