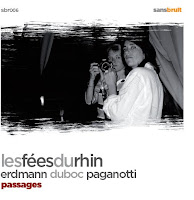 Only recently did I write that German saxophonist Daniel Erdmann's music gains in power by becoming more free, and less than a month later, he's back with another trio album, now with Benjamin Duboc on bass and Antoine Paganotti on drums. The band is called "The Fairies Of The Rhine", after a text by Belgian author Henri Michaux (and based on the German Lorelei legend, going back to the sirens in Homer's Odyssey), and the title of the album refers to his autobiography. And as if Erdmann had heard me, but he couldn't of course, this album delivers the promise totally. The loosely improvised tracks and the open support by Duboc and Paganotti, make Erdmann delve into his more emotional side, creating soft, intense and warm-toned soloing. Soloing is actually not the right word, because the three musicians create a common universe, with no themes or structure. The soft approach does not mean that there are no high energy moments on the album, quite the contrary, but Erdmann manages to maintain the tension by restraining himself. But the slowest pieces are the most impactful, such as "Drames d'Un Instant", which starts with sax multiphonics and arco bass, creating great dramatic effect towards the middle when both bass and sax keep playing the same note for a long time, taking their time to wrestle away from the tonal center. The same approach is made on "Ou Presque", on which the notes themselves seem to have trouble getting out of the instruments, yet it sounds great, sensitive and beautiful. The music flows along, like the river, slowly and inevitably. For Michaux, exploring and experimenting with new things was always the same as an internal search into the own self. He regarded the soul as something fluid and watery, which is difficult to grasp yet there all the same. This trio manages to do exactly the same, and even if some of the tracks are short - 3 less than 2 minutes - they create a quite focused and coherent exploration into soft introverted and lyrical sounds. You have musicians who are so skilled on their instruments that they are fit for the circus. You have musicians who can carry a nice tune and entertain us. Then you have musicians whose mastery of the instrument is totally in the service of creating art. This trio totally fits in the latter category.