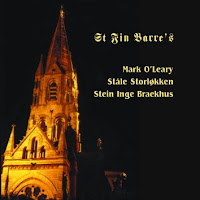 Irish guitarist Mark O'Leary is a geographical and musical adventurer, teaming up in small trio or duo formats with varying line-ups and instruments, ranging from iceman percussionist Terje Isungset over Uri Caine, Tomasz Stanko, Steve Swallow, Alex Cline, Mat Maneri, Matthew Shipp and many more, to recently with young Turkish guitarists, all the time acting as a chameleon, adapting to the other artists' styles, while creating something totally new simultaneously.

But now, after some travels, he's back in his hometown Cork, playing in St. Fin Barre's cathedral, in the company of Norwegians Ståle Storløkken on church organ and Stein Inge Braekhus on drums. After "Ellipses", released earlier this year, this is the guitarist's second collaboration with Storløkken, who is better known as the keyboard/synth player from Supersilent or his collaborations with, amongst others, Terje Rypdal, a guitarist much admired by O'Leary.

The return to the guitarist's hometown also appears a return to music that impressed him during his youth, and to O'Leary's credit, he tries to use this influence to create something new. Not since Jarrett's "Hymns/Spheres" LP have I heard the church organ used in modern music, and it also reminds me of the music of my catholic church-going childhood days (when you basically want the organist to get on with it, so that more fun things can be done after mass), especially with the church bells beginning and ending the album.

So after the bells, you are enveloped in slow, reverent church music, with O'Leary's gentle, slightly distorted guitar sound, playing as slowly and melodiously as you've ever heard him. This is solemn, calm music, the total opposite from the wild nervousness of for instance "Ellipses", even with joyful moments, with the odd reference to baroque music. And if O'Leary and Storløkken show restraint, then Braekhus must be admired for it, accentuating once in a while, at the right moment, gently or forcefully, yet intervening sparingly, if at all. Some tracks add drama, especially the third one, which builds up to a gradual climax of ascending notes, with all the organ's registers open and the guitar's pedals used to full effect. But that's rather the exception than the rule, because the next track moves back into Bach territory (not that O'Leary would have the false ambitions of Yngwie Malmsteen, it stays humble), for a gentle counterpoint between guitar and organ, with a great avant-garde piece as the ideal antidote to follow suit. From Bach over Rypdal to abstract soundscapes, the music is pleasing, innovative and highly unusual. O'Leary classifies his own endeavours as post-jazz, but that's a term which covers a seemingly endless list of new styles and genres. I wish I had this music in church when I was young, I might have looked forward to going to mass ...