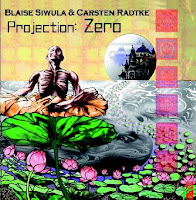 Music can be great in little things. What a great and intimate musical interaction between two artists who understand each other well this record is! Blaise Siwula's alto and Carsten Radke's guitar seem to be made for each other, both in tone and in musical approach. They also demonstrate how improvised music can go well beyond any patterns and harmonies without sounding dissonant. Quite on the contrary, it is at moments amazing to hear how they create the piece together, moving in the same direction, coming together even without falling into patterns. This is gentle, sensitive, organic music. Because they had no preconceived notions when starting to play, they called it "Projection: Zero". Both musicians are also interested in Zen Buddhism, and the first track is aptly titled "Wu Wei Ways", describing their approach to music, with Wu Wei being the state of "action without action", to let things move with natural grace, without forcing things, let things grow out of themselves. And this latter organic thing is precisely what you hear. Siwula listens to Radke, Radke listens to Siwula, notes and phrases, sometimes rhythms are created, repeated, echoed, supported, expanded, ... gently, subtly. That does not mean that everything is always nice and peaceful, or slow. There is speed at moments, there is tension too because many unexpected things happen, yet it is because of this that variety and sometimes differing views that other and new things happen, but in full control, with lots of disciplined freedom. Masterful.

Listen to samples on Siwula's MySpace.