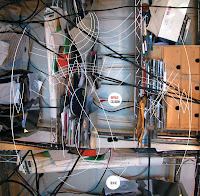 Buffalo Collision is a superband of modern jazz musicians with Bad Plus members Ethan Iverson on piano and Dave King on drums, and complemented with Tim Berne on sax and Hank Roberts on cello. Berne and Roberts are musical innovators, not afraid to boldly go where no man has gone before, not always successfully, but at least daring to jump. Iverson and King are also innovators, but then of the less daring approach, more "inside" than "outside", at least that's what I thought. With Buffalo Collision they bring something unusual, music which is totally "outside", fully improvised, while remaining accessible. The four musicians bring minimalist approaches of spontaneous interaction, creating a wonderful and warm combination of melodic, slow undulating layers of eery, recognisable yet unfamiliar sounds. The first piece is a 36 minute long progressive build-up of musical tension, with explosive bursts of relief once in a while, yet the tension remains, in the implicit rhythms, the shards of sounds, the percussive cluttering, evolving into a dramatical intense middle piece, when the cello takes the lead, supported by percussive piano and almost march-like drumming, followed by a nervous solo by Berne. Sure, Berne and Roberts have been in these regions before, but I am perplexed by the agility of Iverson and King to offer a perfect fit for this special musical excursion, which after 25 minutes of tension actually explodes, forcefully, but magnificently, dramatically, and when the dust settles, sensitive beauty emerges in slow, almost repetitive hypnotic sax phrasings, which after a last emotional outburst dies down in ever quieter interplay. The second piece starts with a steady rhythmic left hand on the piano, with irregular right hand, inviting the cello in, hesitatingly, welcoming, and again King resists the temptation to go for traditional rhythmic support, rather accentuating the proceedings than building a foundation. Berne lets loose here, unleashing his energy, but without overblowing, keeping things controlled and passionate at the same time. The third track is close to 25 minutes, again as open as the first one, again as lyrical and as full of tension, and after the intense middle piece, the band creates the musical equivalent of layers of mist at sunrise, multicolored, slowly moving yet immobile, refined, subtle, and of a wonderful aesthetic, a reverie out which the listener is awakened by some tribal drumming and classical cello. It's hard to describe, but these guys have it all. The breadth, the ideas, the skills, the interaction, the sensitivity, the subtlety, the surprises. A collision indeed. Released just at the end of 2008, let's give it credit for 2009, and it will surely be on the list of albums of the year.

Watch a performance in Brussels last week (the CD sounds better, I must say).

Missed the guys tonight in Paris, (with an excellent excuse fortunately, another concert -Barry Guy's New Jazz Orchestra - at the same time). *sigh* The review doesn't help, reminding me of the cruel choice I had to make earlier. Ok, I had the luck to see/hear Tim Berne 5 or 6 times last year so it makes it easier. The cd is very strong, I agree and Hank Roberts (too rare a musician imho) is shining all along. Go on, put it 6 stars. :-)

They're playing in Ghent, Belgium this Tuesday. Worth the trip from Paris?

Well, I went to see the band at the Beurs and have to say I was very disappointed! I was so disappointed I didn't buy the CD and at the same time I regretted not going the night before to see Food. I decided that one concert would be enough and opted for BC!

I saw them tonight in Ghent, and I must say it was fabulous. I also wanted to go see Food, but I had other stuff to do.

i liked the first set in Ghent, but thought the second one really lacked tension (though the end was excellent). the encore didn't do anything at all for me. maybe i went with the wrong expectations (though i tried to have none), but i was also a bit disappointed.
(and apart from the drummer, the band didn't seem to be into it, but that's only an impression, of course)

Bad Plus bore me.Iverson's playing is enough to keep me away from this one.Love Berne but his compositions suffer from sameness.

There's absolutely no comparison with Bad Plus. That's what I find so surprising and refreshing for King's and Iverson's role in Buffalo Collision.

Maybe I should forget my Bad Plus connotations and get this one.Other than Braxton's Willisau,UNWOUND is my fave "box".

after seeing them in Bruxelles - as mentioned above - I also was told (by another musician friend who saw both shows) that the Gent gig was excellent. Shame i didn't get to see both!!

just in case anybody reads this on the week of 16/02/09 you can always follow this BBC link to hear the band live at the Saalfelden Festival :

the link is only valuable for one week.