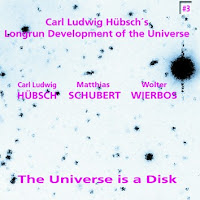 This band's actual name is "Carl Ludwig Hübsch's Longrun Development of the Universe", but there wasn't enough space to put it in the title. The band consists of three brass players: Carl Ludwig Hübsch on tuba, Matthias Schubert on tenor saxophone, and Wolter Wierbos on trombone. On last year's "Primordial Soup", Hübsch opened for me new doors for listening to music, creating a musical universe which had depth and a wonderful attraction without using traditional musical reference patterns. This album is much more intimate, yet it is as bizarre as its predecessor, but then in a totally different way. Hübsch uses traditional jazz tunes and harmonics, with unison lines and solos as if he's trying to revive the old New Orleans music in a modern dress, but then suddenly there is some theatrical dialogue in German between the three musicians, followed by real avant-garde stuff of the kind that is only a slight whisper away from silence, and this played by the three instruments together. The dialogue itself is fun, contradicting, arguing about the tune's itself, which was played perfectly, and once they agree, the unison line gets lost. The theatrical, almost zappaesque effects, come back in "Another Determinator", with humor in the music itself, in the texts and in the way the shouts and music interacts. As with the jester, you're always taken by surprise, the music changes the whole time until you've lost your footing, until you don't know what is what and which is which. Tracks like "Floating Fragments 2", are clearly composed, with definite pre-conceived anchor points scattered across the track in an assymetrical structure, with in between moments of fun or agonizing or beautiful or experimental sounds. "Floating Fragments 3" is pure avant-garde, with sounds that hold the middle between a jungle at night and the music of the spheres. Some tracks are really interesting sound explorations for three brass instruments, but also musically. Yet this trio questions as it creates. It pierces the illusion they've gradually built up over the album. And believe me, there are some great listening moments. Which are then questioned. The last track "Elephantenrunde", brings us back to the trialogue in German, questioning each other in an argument that is to the three of them totally ununderstandable too. Their universe is not only a disk, it is beyond comprehension ("Just a moment. That was not it. What? Again? No. The silence. What? Your place? Which place? The one from before? Mine? No mine. The one from much earlier? Which one? Again? That was another one. Pedantic. Me? No me! Stop! Just a second. Halt! That was not it. No. What was ...? The place. Which place?" etc. etc. or something to that extent). Absurdity kicks in, a dialogue like the music.

This is not my style of music. It is too odd, and like much of music which intends to be humorous, it also creates an emotional distance. Sure, it's fun, it's enjoyable, but never gripping. On the other hand, what a delight to hear so much self-relativation from avant-garde musicians. I don't really like their project, yet they deliver it perfectly.

There is a booklet that goes with the album, but which I didn't get because I downloaded the music (so don't shoot me if I misunderstood the music or the German conversation).