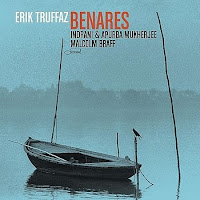 In previous reviews, I have referred to Swiss trumpeter Erik Truffaz as the epitome of commercial jazz. I liked his music many years ago when he was a Miles Davis clone, starting to work with more modern concepts. Since then, he has started releasing records that go in all musical directions, electronics, world music, nu jazz, but always with a very sugary sweet commercial approach, creating fusion upon fusion with other genres, often for lack of new musical ideas. Now he has released another set of new albums, that can be purchased together as "Rendez-Vous", a triple-CD set, with one CD together with Sly Johnson, another one called Mexico. Both of those are to be forgotten immediately (and probably will). Luckily, the third one, "Benares", is also available separately, which saves costs. The album is a delight. Especially for Indrani Mukherjee's wonderful singing and Apurba Mukherjee tabla-playing. But Malcolm Braff's sympathetic piano-playing and Truffaz' mainstream trumpet accents add a nice jazz flavor to the music which fits really well. Real fans of traditional Indian music will possibly be frustrated by the intrusion of the piano and the trumpet, and true, the record is really carried musically by the Mukherjees, yet the combination works well. There are three studio performances, and two pieces that were recorded live at the Cully Jazz Festival in Switzerland. Truffaz and Braff spent two months in Kolkata (Calcutta) studying Indian music with the Mukherjees, then inviting them for a tour in Europe.

What remains a mystery to me is why the album is called Benares, now known as Varanasi, if the musical influence is primarily from Kolkata, which is a few thousand kilometers away.

The pieces on YouTube are not representative for the music on the album, which contains luckily much more singing.