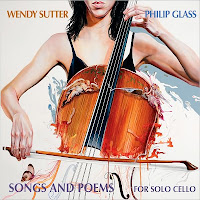 Many years ago I switched on the radio and I heard this repetitive violin sequence, which just kept repeating and repeating itself, with once in a while a little change: it was both hypnotic and ununderstandable. I was hesitating whether it was a stuck record that the radio channel did not notice, but that could not be it, because of those changes. I listened to the whole twenty minute piece, totally mesmerized. It was Philip Glass's "Einstein On The Beach", a wonderful record, a unique listening experience. One of the things that truly get me is what madness, what unbelievable concentration it must require from the musicians to play these lengthy pieces with so little variation. In the meantime, Glass became more famous than any other current classical composer, maybe next to Michael Nyman, because they both write film scores.

Now there is this "Songs And Poems", written for solo cello, and one not to be missed. Unlike many other Glass compositions, the music is hardly repetitive. There are repetitions of course, but then more Bach-like, as musical patterns to play with and explore. As can expected from pieces for this instrument, there is some melancholy to be heard, some dark feelings even, in the middle part and towards the end, but the overall trend is classical in its severe structural approach, its finesse and refinement. Wendy Sutter, also a cellist in "Bang On A Can", is absolutely fabulous on this album: precise, sensitive, and with a great sense of pace. Sutter plays on her "ex vatican stradivarius" from 1620, a unique instrument with a deep and very warm sound.

So far so good, then comes the cold shower: the last four tracks are no longer solo, but pieces from "Naqoyqatsi" that were not used in the movie, on which Sutter is accompanied by David Cossin on percussion and by Glass on piano. Those pieces create a bizarre musical conflict with the rest of the album. They are totally different in style and approach, more romantic, less austere, less dramatic.

I find it mind-boggling that labels can be so stupid and irrespectful, to musicians, but especially to listeners, to break the coherence of such a wonderful album. Nothing wrong with the last four tracks by themselves, but the context is totally wrong. It's like adding some unused Beatles '62 tracks to Sergeant Pepper's just because there was some space left at the end of the album! Who cares if the album is just thirty minutes long? As long as it's good! It drove me up the wall when I heard those additional tracks. And truth be told, I find the terribly kitschy artwork on the album cover as repulsive, and again in total contradiction with the quality of the music. But that should not deter you from buying this album. Do like me: re-record it and delete the last four tracks. You will be holding a true gem in your hands.