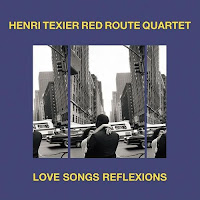 I've always had a great fondness for Henri Texier, because of the warmth of his music, the lyricism, the broad influence from music from around the world, still without falling within the world music category, local folk tunes and always a great selection of musicians to play with. On this album he becomes a little too sweet, too mellow to my taste, yet some of the tracks are excellent. The band gets its name from the London "Red Route" traffic signals, indicating where you're not allowed to stop or park, which to the band meant that they have to move on, continue driving, without stopping. So this band tackles tunes by Dexter Gordon, Lee Konitz, Chet Baker, Art Taylor, Hampton Hawes, Art Farmer, Paul Motian, Bob Rookmeyer... with a creative angle and different approach. And for sure, anyone knowing Texier will easily recognize the bassist's influence in the compositions, yet they are not his, they are his tributes to his masters. The band consists of Henri Texier on bass, his son Sébastien on sax and clarinet, Manu Codjia on guitar,and Christophe Marguet on drums. The idea is good, but the album lacks coherence, Codjia mostly plays soft and relaxed, but then his fusion outburst (o horror!) on the third track is totally in a different category, and on the other hand there isn't sufficient variation between the rest of the more traditional pieces, with luckily two pieces,"Dark Song" and "A Vif", that are a little more adventurous, but then again in a totally different stylistic environment. So in all, it's a disappointment after the excellent "Alerte A L'Eau" of last year. Mainstream fans will surely like this, but possibly not everything.

much appreciated, thank you