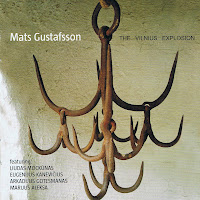 When Scandinavian free jazz with a punk rock attitude saxophonist Mats Gustafsson teams with three unknown (who would?) Lithuanian musicians, Liudas Mockunas on soprano, tenor and baritone sax, and bass clarinet; Eugenijus Kanevicius on bass, supported by the double drum section of Arkadijus Gotesmanas and Jarijus Aleksa, anything can happen. It can be the worst, it can be the best. Luckily it is the latter. Starting without any preconceptions, the five musicians play as if their live depended on it, pushing each other on, listening and following the new avenues opened by the other, shifting moods from violence to sensitivity, from wall of sounds to fragility, and back. Being of a gentle nature, some of it shook me a little at first listening, so it's always good to let it rest, and come back to it, listening again, with sufficient time intervals, in various conditions, and moments. The performance is recorded live for a more than enthusiastic crowd. The interaction between Gustafsson and Mockunas is great, dialoguing, duelling, or playing up a storm. The rhythm section is good, with especially Eugenijus Kanevilius performing the rock solid backbone for the improvisations. This is no music for the faint of heart, and even in the slower moments, dissonance and adventure are the key characteristics, but listen how beautifully the arco bass leads the stuttering sounds of squabbling ducks into a plaintive almost spiritual atmosphere in the middle of the first track. The album requires repeated listens before you really get into it (at least to me it did). And yet again a great release by this young label.