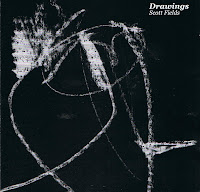 German artist Thomas Hornung has the habit of making many quick drawings, most of which he discards, and some he archives. Guitarist Scott Fields made this CD to accompany these drawings and to mimick their creation. The CD consists of 98 tracks, ranging from 8 seconds to 1 minute. In this short period, there's hardly anything to tell, and that's what it sounds like: short snippets of sound, with no apparent sense. Unless this makes sense to you : "Eventually I decided to convert some (as it turned out 171) of his drawings into a multi-page graphic score. To do that I made a matrix of pitch rows and numbers that represent playing techniques. Then I reversed Thomas's drawings so that what was black became transparent. Finally I lead each drawing over the matrix and used what was visible as an element in an extended, modular composition". It is pretty painful that you need to explain all this, and much more, in two pages on the liner notes. In my humble opinion, music is about music, not about some intellectual and cerebral creation. Click on the cover above to see how much notes remain after the "color reversion". The point of this approach totally eludes me. There are about five trillion other ways to organise notes based on external circumstances, most of which are possibly more valuable than the approach taken here. I have no problem that other art forms can generate inspiration for musical evocations, quite to the contrary, but not through such a mechanistic intellectual process. What Fields does, is just to create randomness. There is no link whatsoever between the drawings and his music. And none of the 98 pieces actually has anything to tell. They're just a few sounds on one or several strings. Less interesting than a bee buzzing around your head. The good news is that "I had 254 takes, 171 of which I kept (...), a month later I culled the 171 acceptable takes down to 99, one for each track possible on the CD". We were saved from listening to a triple CD.