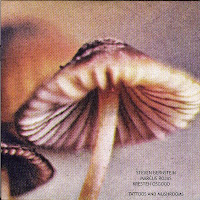 Steven Bernstein is the master of traditional tunes in new clothes, of neat arrangements with a good sense of humor, yet often with more attention paid to the entertainment value of the music than to its artistic development. At times, the humor still prevails on this album, but it is much more refreshing and creative than much of what Bernstein has been involved in in the past years. He is accompanied by Marcus Rojas on tuba and Kresten Osgood on drums. The music is still rooted in tradition, with klezmer, folk, Latin, swing and blues often providing the backbone of the pieces, but the music is all about exploration, improvisation, interaction and musical expressivity. And it's good to hear Bernstein in this role. His playing on the slide-trumpet is excellent, Rojas is brilliant, filling in for the bass-line and often sounding as a bass, yet he also manages quite well to be the second horn too, adding musical color that works really well, as on the slow and somewhat dark "Scaramanga". Kresten Osgood is a drummer who deserves wider attention (more on him soon). Despite the obvious fun the three musicians have on some tracks, as on "So Lonely I Could Cry" or "Eastcoasting", other tracks bring deep melancholic feelings, such as "Khumbu". Nice. I wish Bernstein could continue in this vein. He has obviously more to bring than just entertainment.

I just ordered this from DMG in NYC. Looking forward to it with my February Tzadiks...

Good for you. I hope there's some other good stuff in the lot.

If you're looking for more "serious" Bernstein, I'd heartily recommend his "Diaspora Blues" album. Tradition is its starting point, but it has distinct free jazz flavour. I think you'll love it.