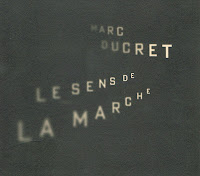 With "Le Sens De La Marche", French guitarist Marc Ducret sets up an ambitious project, combining tightly composed and orchestrated pieces, with room for improvisation and creative excursions, mixing fusion, rock, big band, ambient sounds and even moments that are reminiscent of soundtracks. It is ambitious, because the music wants to tell a lot, with the directness and drive of rock music and the subtleties of jazz, with the power of a horn section, but also adding some grit and dirt in the process, avoiding the smoothness of fusion. It is also ambitious because Ducret started with the project in 2003, working on it over the years, refining, adding, changing, and that's quite clear immediately, there is lots to hear, I mean lots ... a kind of "magnum opus". The band further consists of Bruno Chevillon on bass, Eric Echampard on drums, Antonin Rayon on piano, fender rhodes, and clavinet, Paul Brousseau on keyboards and samplers, Tom Gareil on vibes and marimba, Matthieu Metzger and Hugues Mayot on sax, Yann Lecollaire on clarinet, Pascal Gachet on trumpet, and Jean Lucas on trombone.

This is quite a band, and that gives the music a density and heaviness that is not usually to my liking, but it is quite well arranged, with an excellent sound quality, especially because it was recorded live. And as Ducret himself says: "I am too unhappy in the studio". And the audience really appreciates the music, and rightly so, because Ducret manages to infuse fusion with content and creative tension.

At moments it reminds me of Zappa in his instrumental period, with sudden shifts and changes. The different pieces all have a suite-like approach, with lengthy elaborations, rapid-fire exchanges, and unexpected variations in tempo. Some moments, such as the intro of "Tapage" have the fun sound that could have come from Zappa, but many other pieces have the kind of dark and menacing seriousness, with a strong emotional component. The one piece that has a totally different quality is "Aquatique", recorded in 2003 already, but in its slow, floating, almost intimate space-jazz style, adding quite an interesting contrast to the rest of the album. The highlight of the album is "Nouvelles Nouvelles Du Front", a 26 minute work-out, that starts in the same vein as "Aquatique", but then moves on with a highly rhythmic forward drive, almost funky, with the full horn section, as soloists and as a band creating some real emotional power. This album is too composed to my liking, as said, but for those of you who are more open-minded to fusion and tightly orchestrated music, it will be a treat.