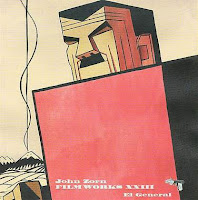 Here's another nice album in John Zorn's Filmworks series. With his top performers Marc Ribot on guitar, Rob Burger on accordion and piano, Kenny Wollesen on marimba and drums, and Greg Cohen on bass. The pieces are atmospheric, with a Latin influence, but then more in sound than in rhythm (except for "Besos De Sangre"), with the piano, the marimba and the electric guitar creating a fine and unusual soft combination. The themes are quite repetitive, like you would expect from film scores, with not too much difference between the calm and unobtrusive tracks. As with many of Zorn's compositions, the tunes are sweet and accessible, but with a dark and nasty undertone at times. The album was intended as the score for a documentary about Plutarco Elias Calles, one-time dictator of Mexico, "who was called everything from a nunburner to the father of modern Mexico", yet apparently only three tracks were actually used in the film. It's always a pleasure to hear these four musicians play, and regardless of the subgenre, they usually have something new to bring as they do here. Nice, but not essential.

Listen to an excerpt from "Recuerdos"