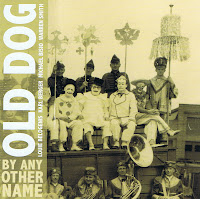 This is the first release by Old Dog, an appropriate name for a band consisting of veteran jazz musicians, with Karl Berger on vibes and piano, Louie Belogenis on tenor, Michael Bisio on bass and Warren Smith on drums. Well, they're not that old, really, and certainly not when you listen to them play. The music has drive, vigor, adventurousness and wonderful expressivity. Half the compositions are penned by Michael Bisio, who is extremely prolific these days - this is my fourth review in which he figures this year - and his title song bookends the album, once in a trio format, and ending with the quartet. His compositions are freebop, with clear theme and rhythm, and they alternate with more open quartet improvisations. The improvisations are equally excellent. "Endless Return" has a coltranesque spiritual expansiveness, a steady bass vamp, repetitive piano chords and a soaring sax. "Who Are You?" offers the other end of the scale of free form: less epic, more intimate, more human. The longest piece, "Constellation", brings a mixture of both, with Berger playing a leading role on piano and vibes. But the real highlight is Bisio's title track "By Any Other Means": sensitive, rich and deep.

These are four musicians who are underevaluated and underexposed. Belogenis has profiled himself more as a leader in the past years, but then with changing line-ups and band names, which does not really help to get wide recognition. Smith has also contributed to some of the better albums and performances of the last years, but again in all modesty. Karl Berger has been almost invisible in the past decades. Bisio has been more prominent lately, but still, the public awareness of these musicians is inversely proportional to their skills and value.

Listen to an excerpt from "Who Are You?"


Listen and buy from Porter Records.

I loooove this album...

" the public awareness of these musicians is inversely proportional to their skills and value."

I loooooove this album too!