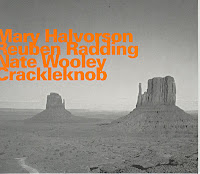 Clarity, inventiveness, immediacy, coherence, intimacy, surprise ... are the words that come to mind when listening to this album by Mary Halvorson on guitar, Reuben Radding on bass and Nate Wooley on trumpet. This is avant-garde music that has no intention to alienate, quite to the contrary, it explores, but gently, it breaks open walls, but not with a sledge hammer, it opens new roads, but not with a bulldozer. The second quality of the album is the relative sound value of the three instruments, or rather the lack of it. All three are tuned to the same level, with the bass a little more prominent in the foreground than you would expect, and the trumpet a little more in the back, so that all three sound with an equally strong voice. All pieces are freely improvised and each musician adds his or her thing to the music at hand, without apparent lead or hierarchy, adding accents, deepening the color or contrasting. All three also vary continuously between the use of traditional sounds and phrases (good to hear Wooley's trumpet voice again, instead of only whispers!), but then placed in an uncommon context, or going plainly for more extended techniques. Halvorson's guitar playing is something of an acquired taste, but repeated listens will help overcome that feeling, and again, the variation in the music also shows another, gentler and softer side. Radding too is a wonderful listener, reacting almost simultaneously, often hard to believe for improvised pieces (although you can't see whether signs were exchanged, of course). Beauty and exploration intermingle, leading to a sweet harshness, to a sad perplexity, to a vulnerable intensity. A trio that goes against the grain, but constructively, in a great mix of skills and ideas.

PS: I didn't know what Crackleknob meant. The picture below is a "crackled knob", the closest reference I could find. 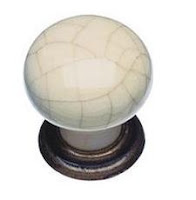