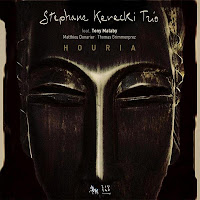 French bassist Stéphane Kerecki had the brilliant idea to invite saxophonist to complement his trio with Michel Donarier on sax and Thomas Grimmonprez on drums. As usual, Malaby's performance alone is worth purchasing the album, but its real value resides in Kerecki's musical approach. The compositions shift between total improvisations and tightly composed elements, of nice unison themes, often with African references and rhythms, but then with more shady outlines like a modern painting, expressive and coloring outside the lines, while remaining very accessible throughout. "Houria" is the Arabic word for freedom, and the music's open texture testifies to that, with sensitive soloing of all four musicians, but with obviously the best dialogues between Malaby and Donarier. At moments, but very rarely, it is a little too mellow to my taste, but that's personal. The really improvised pieces are the best, I think, and there is sometimes too great a distance between the inside and the outside playing to make it a really coherent album, but it clearly shows wonderful promise. It has beauty and expressivity, a warm feel and adventurous moments.

We've booked the band for a Belgian show.