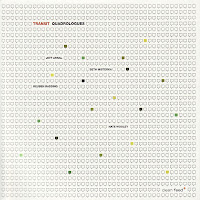 In 2006 this quartet released the CD "Transit", under the leadership of drummer Jeff Arnal, with Seth Misterka on sax, Nate Wooley on trumpet and Reuben Radding on bass. The band is now called "Transit", and it brings this wonderful album of free improvisation. The first album was quite adventurous, with a very dense and loud, sometimes violent sound. This album is even more adventurous, but they let silence in, and quietness. The result is one of increased tension, of an increased quality of the individual sounds, more attention to detail (much more), less struggling between the musicians to get space, and hence a more mature interaction, if I may use that word. But over and beyond the tension, over and beyond the unusual and usual sound explorations, there is a depth of feeling that is astonishing. The first track "Strata" already starts with a strong trumpet performance by Wooley, going really deep, but the whole band excells in the slow and intense "The Science Of Breath", a long piece on which the long interwoven tones create something of a hard to place beauty. And even if the horns define the most audible effects, listen how Arnal's drums shift the deep structure by evolving from screeching sounds out of his cymbals toward hypnotic repetitive rhythms on his toms only. So much in the background yet defining the song's depth. "Flip" is more playful, toying with little sounds, interacting all four without falling into a pattern, almost, but not quite, and that's part of the fun, becoming elusive while playing the same game. Fun is also there are the start of "Rapid Eye Movement", with a nice interaction between Radding's bass and Arnal's drumming, with Wooley and Misterka joining in the repetitive but weird sounds. Subtle and creative. "Z Train" is more boppish - what else would you expect - in nature as defined by the bass, with Arnal's drums going fully against the rhythm of the bass, while sax and trumpet play slow phrases over the rhythmic excitement. Another highlight of the album is the long "Speaking In Tongues", with Wooley leading the piece with again a delight of a trumpet solo, that moves into a more African tune and rhythm, but then in a context in which all options are still open, without falling into clichés or patterns. In the hands of great musicians free jazz is without a doubt the most rich and moving musical genre. And all four of them excell here. The last track alone testifies to that. How they move the piece from avant-garde sounds, to a more uptempo piece, on which Misterka really shines with soulful and heartrending phrases. I have listened to this album at least a dozen times in the past few days, and it sounds different every time. There is lots of variation, lots of creative approaches, and a joy to the ear. Don't miss it!

Excellent review.Just got this in mail today,and...INCREDIBLE! Glad you're around to provide description...

I don't buy alot of albums anymore but the Clean Feed label is threatening to obiterate my budget. The last two you reviewed sound really good. Quick side note, recent Clean Feeds by Harris Eisenstadt and Denman Maroney are the best "new" releases I've heard in a long time.

The first "Transit" album had some great music but also had parts that were hard for me to listen to. Kind of just sounded like noise. I think I am reading that you believe this one is a stronger album, No?

I've said this before but thanks for you reviews.

Hi Anonymous, I agree with your comment. The Eisenstadt and Maroney albums are also among my favorites of last year. And true again, Transit has decreased the harshness, but not of its poignancy.

Thanks for the response. My name is Nick by the way, forgot to include that.

John Butcher is having an incredible year!