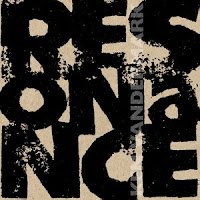 Free jazz and big bands, even the smaller big ones like this tentet, do not usually quite match. It requires arrangements, pre-meditated structures and at least some compositional unity, otherwise it becomes a volcanic brew of chaotic notes flying in all directions. Chicago-based saxophonist and composer Ken Vandermark had tried before to work with larger ensembles, like his Territory Band, but they were really not my cup of tea, I enjoy him (and many others) more in the smaller ensembles, in which subtlety and intimacy rather than power and volume define the sound. Yet I do like them occasionally, and this one is truly excellent, an international band of top musicians from the US, Sweden, Ukrania and Poland, to know : Magnus Broo on trumpet, Tim Daisy on drums, Per-Âke Holmlander on tuba, Dave Rempis on tenor & alto saxes, Steve Swell on trombone, Mark Tokar on bass, Mikołaj Trzaska on alto sax & bass clarinet, Yuriy Yaremchuk on tenor, soprano & bass clarinet, and Michael Zerang on drums, with of course the leader on tenor and baritone.

This vinyl LP consists of two pieces, each on one side. "Off/Set", starts with an arranged intense frenzy to start with, a typical Vandermark theme, with the band being built up of several groups playing together and then in full counterpoint and counter-rhythm, with polyrhythmic percussion and alternating soloing, slowly decomposing the piece into several streaks of music, slowly loosing the tempo, unravelling the themes into their spare parts, until only a few wild voices are left, dialoguing without structure and concept, full of wonder and surprise, until only the percussion is left, close to silence, with lots of open space, until the mute and voiceless tones of the tuba bring the other voices back to life, like animals waking up in the early morning, screaming, shouting, until slowly, the different voices develop into a backdrop of unison sounds, to suddenly explode into a common theme again, more abstract with intervallic jumps, wild and powerful. The second piece "The Number 44" is sheer brilliance. It starts slowly with only cymbal sounds, then into a brass band kind of slow march, mostly unison, but with the saxes giving some intermittent wails, leading into a beautiful bluesy trumpet solo by Magnus Broo, but behind him the band picks up speed, slowly and powerfully like a train, with Steve Swell now soloing, then the rhythm changes, becoming boppish, leaving the trombone basically unperturbed in its course, even when the main theme comes back, then Trzaska (I think) gets a go on his alto, strongly, melodically, wildly, while the rest of the band retreats into the background except for the drums, only to come back in power, leaving space for the next solos, that shift the piece again in a quiet mode, with the horns deep in the background, of course all returning in full force for the grand finale. A wonderful piece with excellent musicianship. And Vandermark really organised his music in such a way that all ten musicians of the band can shine, play the things that suit them well while keeping a very strong control over the totality of the sound.