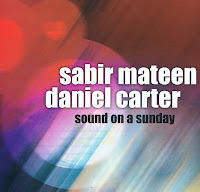 On the agenda were also Daniel Carter and Sabir Mateen, two of the leading figures of the free jazz scene of the last decade, playing one performance together. Although this is a duo recording, the list of instruments being played far exceeds what you would expect : both musicians play alto, tenor, piano, drums and flute, with Mateen adding clarinet and Carter trumpet, which of course leads to a myriad of combination possibilities. And despite the range of instruments, they start the performance with the first instrument : the human voice, for a number of shouts, wails, whispers and rhythmic vocalizations, setting the tone for what is to come : a wild mix of tribal, urban, spiritual, boundary-less adventurous and very physical music. When the voices die down, trumpet and clarinet play hesitating notes, like chicklings cracking through the shell of the egg, full of wonder and curiosity, further accentuated by the question mark-like inclination at the end of Mateen's clarinet phrases. In the meantime Carter has switched to piano, creating some busy tension, allowing for Mateen to pick up his sax, and join the free fun of the intense dialogue, and when the piano stops, he blows some of the highest piercing notes I've ever heard come out of a sax, sufficiently high to make Carter use his voice again, ending with a loud applause from the large audience, easily a couple of hundred people from the sound of it, a rare situation for this kind of music. The second piece consists of piano and alto, and I'm no longer sure who plays what, but it is raw, free and soulful, full of thundering chords and passionate screams (my guess : Mateen on alto, Carter on piano, but I may be wrong). On the third track Mateen starts reciting some uplifting poetic messages for world peace, while drumming in support of Carter's wild exploration of the keyboard. The pure physicality of the music and the fact that neither of these instruments is their first instrument, adds something to the overall feeling that their music is all about unleashing all internal forces into the outside world, and mixing them into a more powerful whole. Yet it's not all about power: the second track starts as a flute-drums duet, all subdued and calm, reverent and peaceful, melodic and rhythmic, leading to some shouting and singing, more like incantations or chants, ending with the two flutes playing, joyful and light-footed. No doubt the best track is the last one, with the two musicians playing their saxes, reacting, provoking, leading and challenging, swirling and soaring, going through moments of tension and calm, soft interplay and free interactions. It is clear that for these two musicians, music is the power of life, and the power of life is music. A great short album, quite short for a CD actually: a little over 37 minutes. It is also not a recent release, but I got hold of a copy only recently. Actually, I thought it was released this year, but I noticed only after reviewing it that it dates from 2006, but well, recent enough, and still worthwhile sharing the review, I hope.