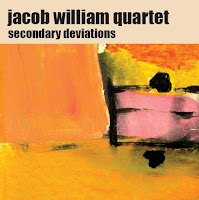 A nice album that starts rather awkward. In the very first tune, "Welcome Steps", I got the impression that both trumpet and sax where hindering rather than reinforcing each other, not sure when to play or not, adding phrases that do not really match the other one's musical injections, further accentuated by the unequal sound quality of both instruments. But gradually the interaction gets better, more open, not only in that specific tune, but also on the CD as a whole.

Jim Hobbs is on sax, in a more free constellation than in his own Fully Celebrated Orchestra, and I must say, it suits him well. Forbes Graham plays trumpet, a musician not known to me, and he is good. Young Croix Gallipault plays the drums. But Indian bassist Jacob William is the revelation of the album, since no matter how good his frontline is, his open rhythmic pulse drives them on, slows them down, sets the tone and scene, like a solid and supple backbone that keeps the music focused and coherent. The music itself is slow, bluesy, full of soul, yet also with some middle-eastern tonal inflections, especially on the lengthy "Rishi Ways". "Palm Dance" is a little more rhythmic and possibly the best track on the album. "Upload Method" is a little more free, although because of too much repetitive phrasing it seems to stagnate a little, not going anywhere really. The last track, "Repetition", brings more tempo into the action, although the piece lacks a little depth and character. In all, an album with ups and downs. Some really great moments, some that will not really stick in your memory, but the promise is there, clear and loud.

Listen and buy/download from Ayler Records.

and don't let the 'metal' tag scare you away, KD may make some metal noises but they're definitely not a metal band