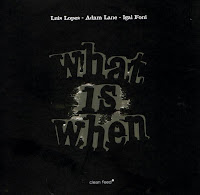 It was an honor for me, your humble servant, to be asked to write the liner notes for this album by Luis Lopes, Adam Lane and Igal Foni, a group whose performance I saw in Lisbon, Portugal, two years ago. Here is the text (with thanks to Scott Fields).

"What blues, early rock ‘n’ roll, and punk have in common, the source of their shared strength, is a dominating, unique, and truthful expression of emotions – sadness, anger, fear — sometimes in spite of musicians’ limited instrumental skills. These genres have a direct and true authenticity that is often so much more valuable than the cerebral polish that comes out of music schools.

This trio taps that true source of music: our human emotions. And despite these three musicians’ obvious skills on their instruments, they strip their music of all unnecessary ornaments, accessories, digressions, tinsel, and decorations. And even if there is a musical structure underpinning the compositions, the performances themselves, steering clear of the cerebral, are stripped to the music’s bare essence. The brain and instrumental technique are not switched off; they are bypassed.

You still get the sophistication of jazz, rhythmic complexities, complex scales and harmony, yet deliberately working outside those elements at the same time. But they stick to their unique vision: raw, true and authentic music. Real music. These three young jazz musicians play, despite the obvious jazz form of the music, blues, rock ‘n’ roll and punk at heart, with a touch of menacing darkness at times.

Portuguese guitarist Luis Lopes is an absolute master of finding the right note, of finding the right pace, a rare quality among guitarists these days. He is not into pyrotechnics. Better still, he seems averse to flash. It’s all about the music. The tone of his instrument is deep, sometimes slightly distorted, with limited sustain, leading to a dirty sound that softens to gentle and clean in the more lyrical moments.

Adam Lane is, as well as an excellent composer, a wonderful and versatile bassist. And although his electronically amplified bass can bring him into uncharted regions, his tone and compositions always carry that bluesy feeling.

Israeli drummer and former “genius goalkeeper” Igal Foni is less known. He has already recorded with Michael Attias and Avram Fefer, yet he clearly deserves wider attention. He is the perfect percussionist for this trio’s musical vision: subtle when needed, wild by nature, and creative at all times. He doesn’t restrict himself to his drum kit; in his eyes anything that can be beaten is an instrument.

The album will take the listener on a journey through diverse territory, starting with the odd-metered, changing repetitive phrasing of “Evolution Motive,” over the beautiful and slow “Cerejeiras” (again, listen to how few notes Lopes needs to tell his story), along the weird oddity of “Eufoni,” on which Lopes and Foni exchange instruments (which luckily doesn’t last too long), over the rockish “The Siege,” into avant realms with “Street Clown,” an improvised piece driven by Lane’s bass, with Lopes playing little notes à la Joe Morris, yet more controlled, along the slow and bluesy “Melodic 8,” (penned by Lane), which Lopes joins by playing one note every five seconds before moving to denser phrasing, then crossing a Lane classic “ChiChi Rides The Tiger,” which has a totally different flavor due to its jazz-into-fusion-into-punk, up-tempo evolution, a wonderful piece to unleash Foni’s polyrhythmic energy, for Lane to use his pedals and effects, and for Lopes to show a different side of his playing. A rich and memorable journey that ends with a five-minute heartrending arco bass solo by Lane.

Despite the variation and angles, the musical approach in all the pieces is the same and their coherence will strike the listener: whether slow and sensitive, up tempo and powerful, weird and unpredictable, complex and skilled, the underlying driver of it all is uncompromising emotional authenticity. Straight from the heart: raw and honest".

congrats Stef, as always stellar writing. hope to read these words from my own copy, hopefully sometime in the near future.

that's realy cool of the clean feed people. and well-written, as usual. thumbs up!