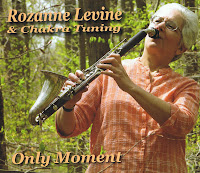 Clarinetist Rozanne Levine is possibly less known than the musicians she plays with on this album, Mark Whitecage and Perry Robinson, both on a variety of clarinets and saxes, yet she has played a lot with William Parker and Mark Whitecage, but also with the bands of Jackson Krall, Jason Kao Hwang and Jemeel Moondoc. She is joined here by Rosi Hertlein on violin and small percussion on a couple of tracks. The band is called "Chakra Tuning", although it is not really a band album, but rather Levine playing some solo pieces, and some with the band. As the name of the band suggests, spirituality is a determining factor in the music, and the cover and title could give the impression of an inspirational or new age album, genres I'm more than a little allergic to, for the simple reason that they usually have no story to tell. Everything is nice and beautiful, and even if this state of bliss and happiness is to be pursued, there is probably no place more boring than heaven. Stories are created out of the tension between different forces, characters, emotions, forms, ...

To make a long story short : Levine manages to tell a story, hence this review. It is spiritual music in its essence, but also an adventurous journey into musical form and dialogue, intense at times, then more relaxed and probing, now full of unexpected turns and interactions. All four musicians are excellent instrumentalists and their open dialogue is really worth hearing. Her two solo pieces, that bookend the album are nice to hear, but the real joy is in the intimate dialogue between the four musicians.