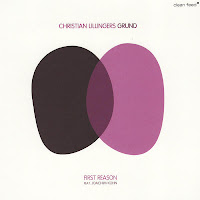 This is German drummer Christian Lillinger's debut album as a leader, but by my calculation already the eighth album he plays on, and the guy's only 25 years old. That says enough about his reputation for percussive skills: broad, expressive, functional, subtle. You get that on this album. And he's as good as a composer/leader. Not only did he assemble this odd band with two bassists (Jonas Westergaard en Robert Landfermann) and two reed players (Tobias Delius and Wanja Slavin), with the great Joachim Kühn joining on piano on a few tracks, but the music he creates with them fits within a category on its own. It is gentle, warm, lyrical, full of character and utterly creative. It's charming and welcoming, soft and free-spirited at the same time. There are no exuberant emotional outbursts, no iconoclastic destruction, it's all subdued and elegant, without being sentimental. Most pieces have a clear composed often abstract theme and structure, except for the three tracks called "Grund", which sound like pure tonal improvisations. Describing the music is impossible, as difficult as finding something to compare it with. I have listened to the album for more than a month now, putting it on time and again, yet I postponed writing about because I lacked words. So there you are. Great album. Nothing more to say. A guy to follow.