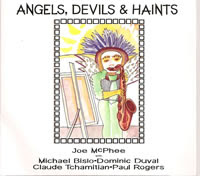 I'm going to have to check this out. Thank you very much for the heads-up. (I should thank you more often -- I really do check this site on a regular basis.)

And let me know if you want to hear the ultimate Ayler-related "small world" story...

After Albert Ayler's death in 1970, his brother Don, who didn't often play with anyone else (and who had severe mental health problems of his own), nonetheless tried to put together his own band for a tour of Europe. He needed someone to play the sax, so he asked an unknown young Cleveland bebop player named Frank Doblekar to give it a try. Frank hadn't played much free jazz yet, but Don had a gut feeling he'd be able to handle the trip outside the pocket. It was a bizarre, mind-altering experience for young Frank, who'd practice with Don and the others, only to have Don stop everything to give him pointers like, "You're playing too much like Coltrane. Try to play more like my brother!" (Can you imagine trying to live up to that?)

In any case, the band went to Italy, recorded one live album there (now very much out of print and almost impossible to find -- (http://www.ayler.org/html/donayler.html), but then had to come home. Don just wasn't up to it. He would never make another album, and young Frank Doblekar would never appear on any other recording, free jazz or otherwise.

Fast forward 27 years or so. I'm a huge Ayler fan, mind you, and I had recently used Ayler's death in a crime novel. (I mention several other free players like Cecil Taylor, Brotzmann, etc. Real great idea when maybe 1% of my readers have ever heard of them, but I couldn't resist.) Anyway, I meet Frank Doblekar and I hear this amazing story of his short stint with Don Ayler, and I'm totally blown away.

So where did I run into Frank Doblekar? He was my daughter's second-grade teacher.

Thanks! Great coincidence ... Can you give me the name of your novel? I'd love to read it.
stef

It's "Night Work" (by Steve Hamilton). Least I can do, after all the great recommendations, is send you a copy. Please send me your address and I'll put it in the mail. (Just click on my website link and you can send me a note right through that...)

I knew both Frank Doblekar and Don Ayler. Frank was modest. He really helped Don get his musical chops together in preparation for this trip. Frank was (is?) a very talented player. Everyone was playing Coltrane in those days. Few tried to imitate Ayler both because it was not fashionable and because the few who did were not as talented as Albert and could not create the beautiful melodies that he was capable of. Don picked up some other musicians in New York--unknown players (though one was the son of somebody well known--I forget who) but skilled enough. Some Italian organized the trip and the recording but the whole experience never really helped Don or Frank, who later left town and one day called me up to tell me that he had come across Roswell Rudd playing in a dixieland bank in upstate New York! That's the last I heard from Frank who was a fine musician and person.

nice review. always good to hear about joe.
do you have an idea where i can find this album on the net? and is it available as LP also?

concerning the article itself, i have some corrections:

1- this is not the first recording of joe with claude tchamitchian. there is at least one other called "next to you" published by emouvance in france in 2006 (with also daunick lazro and raymond boni).

2- there is many other double bass reunions albums. the ones i can think of now are:

– For all it is (4 basses – barry guy, barre philipps, jean-françois jenny-clarke and palle danielson, and one percussionist – stu martin) published on JAPO in the early seventies.

- for four rooms by ensemble sondarc: this is an unbelievable 6 double-bass ensemble improvising in four different places, including an empty whirlpool with huge reverbaration. i can;t tell you more. you need to listen to it.
it was published by for four ears in 97 or 98.