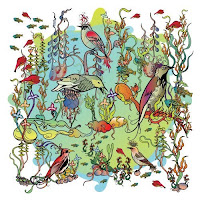 This is the fifth album of Zorn's Music Romance Series, after "Music for Children", "Taboo & Exile", "The Gift", and "The Dreamers". Many musicians would be happy to have created one musical sub-genre as a lifetime achievement, ... yet the music here is one of the many that Zorn created in the past decades. It is a highly accessible amalgam of musical familiarity, yet brought in such a way that it is something else entirely, joyous in the simplicity of rhythms and structures, sublime in its melodies, dark in its undertones and tension. The music fuses jazz, klezmer, surf music, rock 'n' roll and soundtrack, interspersed with ambient sounds. The band consists of the usual suspects : Cyro Baptista on percussion, Joey Baron on drums, Trevor Dunn on bass, Marc Ribot on guitar, Jamie Saft on piano and organ, Kenny Wollesen on vibes. Technical skills and sophistication is what you can expect from these guys and that is what you get here : plenty even. But the real treat is the great atmosphere that this music creates. It is a lighfooted, mid-tempo chain of great tunes burdened with dark sighs and the whistling of ghost birds. Indeed, the album's titles read like a list of extinct birds, from the "first bird" archaeopteryx (extinct 145 mio years ago) to the O'o (extinct 1934), one third of which lived exclusively on Hawaii, including the bird in the title . The music is possibly the best of the whole series, even better than "The Gift", which was my favorite so far. All musicians are great, but again Ribot is the absolute master in the genre. His bluesy power improvisations on "Little Bittern" (New Zealand version, extinct 19th Century), accompanied by Saft's heavy electric piano chords, are great, only outdone by his subtle melodic 50s sounding guitar on "Archaeopteryx" , less notes but played with bell-like clarity, over a cool jazzy klezmer melody, with the percussion and piano organizing some very dark contrasting backdrop. Sit back, relax, be very worried, and enjoy!

Thanks, Stef, that was a good read. I agree that Ribot is on fire on "Little Bittern". Great stuff.

love this blog, the music needs it. I live in the mountains of West Virginia and the site helps me stay connected...

O'o is one of my favorites this year... great stuff... one of the best in the Romance Series.

and don't forget the wonderful artwork! :)