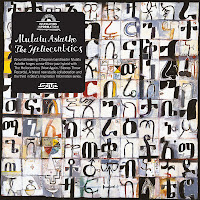 It is hard to define the status of Ethopian vibist Mulatu Astatke. He kind of invented and developed what has come to be known as Ethio-jazz, mixing Ethopian rhythms and melodies with jazz and latin music, resulting in very danceable music. But there is much more. His melodies and musical vision are extremely powerful. They're rhythmic, expansive, joyful, sad and never-ending. His compositional voice is unique, easily recognizable and absolutely delightful. There's only one downside. And that downside is "the West", or "the North", whatever you call it. Even Duke Ellington once said "This is good. I never expected this from an African", a compliment disguised as an insult, or vice-versa. Anyway, the only way he seems to be able to get attention is via the collaboration with American or British bands, with the Either/Orchestra first, now with the Heliocentrics, a band to keep far away from, but not necessarily for this album. Sure, they keep their funky combination of trip hop, jazz and psychedelia, at times adding insult to injury, but most of the times it does work pretty well, keeping the hypnotic groove of Astatke's music intact. I can still highly recommend the Ethiopiques Series, and especially volume 4, featuring Astatke, and recommend the double CD with the Either/Orchestra. This album is OK, but nothing more than that. It is a mixture of stuff, often characterless, but the Ethopian's music is so compelling, that it even withstands the treatment given here. I hope it will lead listeners to the real music.

Watch a Youtube clip with the Heliocentrics, bringing "Yekermo Sew", one of Astatke's greatest compositions.