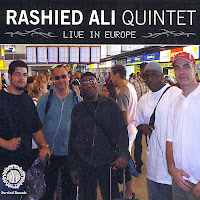 Two days ago, Rashied Ali sadly passed away during heart surgery, at the age of 76. Ali was a subtle power drummer, possibly best known for his collaborations with Coltrane in the 60s, and then primarily for the stellar "Interstellar Space", a genre-exploding sax-drums duet between two masters, to be followed by many collaborations later, including Jackie McLean, Alice Coltrane, Archie Shepp, Carlos Santana, David Murray, ... to name just a few. Ali was bop, Ali was free bop, Ali was free jazz, and these three sub-styles are duly present on what might be his possibly last release, this "Live In Europe", with Joris Teepe on bass, Greg Murphy on piano, Lawrence Clark on sax and Josh Evans on trumpet. The two long pieces on the album were written by James "Blood" Ulmer, in whose band Ali played. The third, central track, is a slower bop piece by saxophonist Lawrence Clark, giving the album a quite balanced structure. The music is great, nothing boundary-breaking, but quite entertaining, showing that even at the age of 76, Rashied Ali was still among the best drummers. Also check his recent "By Any Means" with Charles Gayle and William Parker.

"He was at the top of his game until his last day," his wife Patricia said yesterday night. "He just had such integrity about his music."

And that is what real art is all about ...
Thanks Rashied.