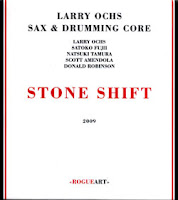 No doubt Larry Ochs is one of the best modern saxophonists and creative musicians, possibly best know from the ROVA Quartet, but some his recent work is also stellar, such as "Up From Under", with his Drumming Core trio. The trio is just him on saxophone accompanied by two excellent drummers, Scott Amendola and Donald Robinson. Next to that he has many projects, often with unusual line-ups and daring musical vision.

For this album, the trio found kindred spirits in the Japanese couple Satoko Fujii on piano and synthesizer, and Natsuki Tamura on trumpet.

The commonality in their approach is their virtuoso mastering of their instruments, combined with an almost obssesive compulsion to innovate.

The third, and possibly most unusual one, is that they have a kind of dramatic, almost cinematic approach that conjures up a certain imagery in the unconscious (at least it does to me).

The long first piece on the album starts quite rhythmic with the trio launching in a powerful drive, but then the whole piece gets transformed, with the synth sounding like organ, being pounded and tortured violently, then evolving into a weird almost middle-eastern tune turning into jungle sounds, then becoming wild, and hypnotic, propulsed forward by a mad beat and the eery screams of the trumpet.

The second piece starts with dissonant piano-playing over which the two horns fall in with a long, meandering unison theme, ending in beautiful soloing by the trumpet over a chaotic backdrop of piano and percussion, like a seagull flying calmly over stormy waves crashing high against dark rocks, at night, but then the piece is expertly deconstructed into short repetitive phrases, in an increasingly halting rhythm. The third piece is even more abstract, as a spontaneous collage of sound interactions, turning into a quite dramatic, intense and almost theatrical musical scenery, indeed fit to accompany a Kurosawa movie, to whom this track is dedicated.

The last piece continues in the same direction of musical paradoxes, leading to a great feeling of built-up tension and occasional relief: it is rhythmic and not, it is lyrical and dissonant, electronic and acoustic, harsh and smooth, powerful and soft. There are moments that you really do not want to hear, and some you want to get back to time and time again, but these two parts need each other to get the impactful effect you get here. Strong stuff!

Remember John Lurie's (excellent) CD 'Men with Sticks : John Lurie National Orchestra', a very classy trio with two drummers and Lurie. Most people seemed to miss the point back then (1993) and I never heard much more from that project, which was a shame. Check it out if you see it in a second hand shop!

Thanks Joe,
I have it, with Billy Martin and Calvin Weston on drums.

Yo - thanks for the review.... I love this CD, no doubt about that; BUT 2 years and 2 USA tours later, this band is really now a great BAND. Everyone, including Ochs, really gets the possibilities in the music now, is comfortable with the forms and with each other. All to say: we hit the road in Europe November 28-December 7 (9 concerts in 9 days in 7 countries; details at www.ochs.cc), so if you like this CD, try to get to one of the concerts because you should be blown away by what takes place live. (I know this sound like an advertisement, but it's really pure enthusiasm. Anyone who knows me will tell you I never would say something like this if I didn't mean it. Amendola and I looked at each other at least once a show in disbelief at what we were hearing musically.)
Larry Ochs

Hi Larry,
Thanks for your reaction. December 5 was already in my agenda for your Brussels concert. See you then.
Stef